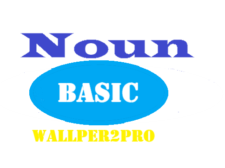 Nouns are classified into:(a) the common noun and
the proper noun ,or into (b) the concrete noun and
the abstract noun.

(1) common noun -Name given to every person place
or thing of the same class Examples (Boy ,river,animal,
town)

(A)Abstract -Name given to an abstract idea or
something that cannot be felt or seen or heard.

(B) collective- Name given to a number of persons
or things taken together.
(A) Abstract – Three part
(a) Quality -Examples -goodness,honesty,kindness
(b) Action -Loughter ,hatred,stealth
(c)state- Boyhood,freedom,health

A singular noun indicates one thing while the plural
more than one .plurals are formed by adding s/es/ies
to the singular or sometimes -ves. Sometimes the
plurals are mutated plurals (foot-feet,woman-women,
child-children)there are also unchanged plurals (sheep,
deer,bison,cannon,salmon)

Foreign Plurals
Plurals of foreign words are formed according to the
rules of the original language .
Latin plurals

The Following are Always Plural

such nouns indicate a collection and are treated as
singular

Nouns and their Diminutives /young ones